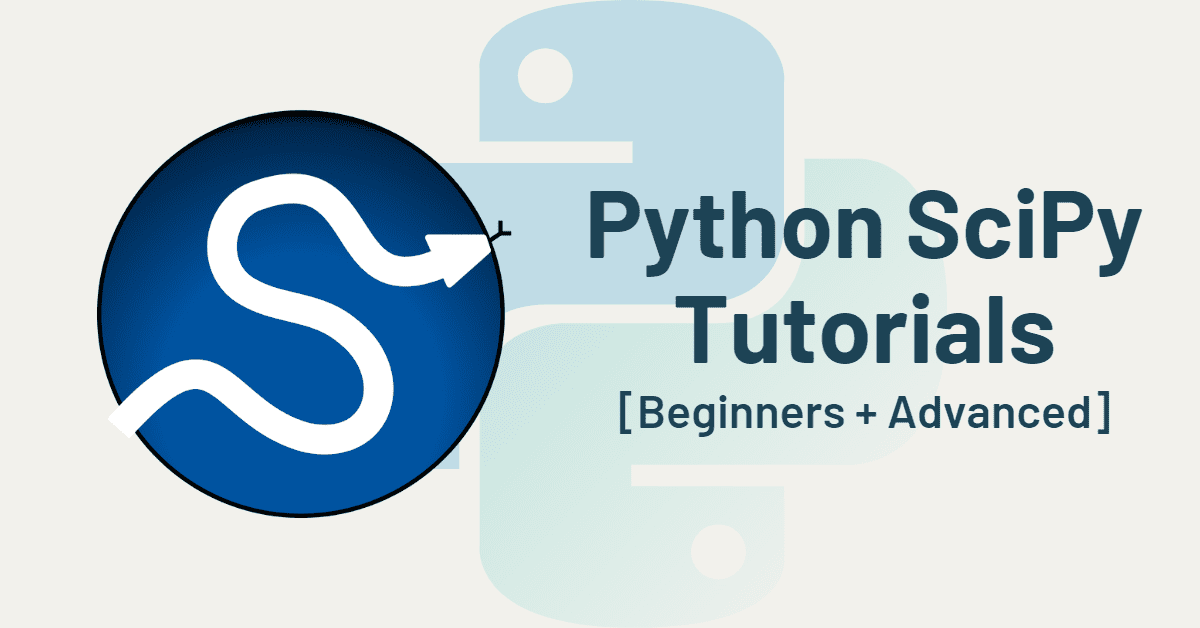 Do you know about SciPy, if you don’t know, then you are at the right place.

For the purpose of resolving issues in mathematics, science, engineering, and technology, SciPy is an open-source library for Python. Utilizing a wide range of sophisticated Python functions, it enables users to alter and visualize the data.

On top of the Python NumPy extension, SciPy was developed. Also known as “Sigh Pi,” SciPy is pronounced. The GNU Scientific Library for C/C++ or Matlab is the second most popular scientific library after Python’s SciPy package.

By offering the user classes and high-level commands for data manipulation and visualization, it significantly increases the capabilities of the interactive Python session.

This tutorial will walk you through using SciPy, or SciPy in Python, from basic to advance and expose you to some of its key capabilities. In addition, we’ll examine the many modules or sub-packages included in the SciPy module and examine their usage.

You need to have a fundamental knowledge of mathematics and Python before beginning to learn SciPy.

The package “constants” of Python Scipy provides Mathematical constants, physical and units. Using this package, we will learn how to use the constants from the Scipy in Calculations.

SciPy, a Python library, offers the package “scipy.sparse” for generating sparse matrices from a variety of data types as well as for transforming dense matrices into sparse matrices. To know how to create a sparse matrix and transform the matrix from one form to other follow the below tutorials.

FFT( Fast Fourier Transforms) is the package that is used in a way to express a function as the sum of its periodic components, and one way to extract the signal from those components is by the use of Fourier analysis. Using this package we will perform Fourier Analysis.

The definition of several special mathematical physics functions is the primary function of the “scipy.special” package. Gamma, beta, hypergeometric, airy, elliptic, bessel, parabolic cylinder, mathieu, spheroidal wave, struve, and kelvin are among the available functions. To know about these functions use the below tutorials.

We cover a lot of “scipy.stats” features in this section but by no means all of them. To give a user a practical understanding of this package is the purpose here.

Several widely used optimization techniques are offered by the “scipy.optimize” package. Below is a comprehensive tutorial.

A few filtering functions, a small number of filter construction tools, and a few B-spline interpolation techniques for 1- and 2-D data are currently included in the signal processing package(scipy.signal). It is necessary to know that in SciPy, a signal is an array of real or complex values in order to comprehend this section by following tutorials.

In order to work with arrays of any dimensionality, the “scipy.ndimage” packages offer a variety of general image processing and analysis functions. We will use the below tutorials to learn how to process the general image.

By utilizing the Qhull library, The package “scipy.spatial” can calculate Voronoi diagrams, convex hulls, and triangulations of a set of points. Additionally, it includes tools for computing distances in different metrics. We will learn about some of the functions of these packages using the below tutorials.

SciPy package “scipy.interpolation” offers a number of general interpolation tools for data in dimensions one, two, and higher.

In information theory, target identification, compression, communications, and other fields, clustering methods are helpful. Only the k-means algorithm and vector quantization are supported by the vq module in package “scipy.cluster”. To know how this package works use the below tutorials.

One of the integration methods offered by the “scipy.integrate” sub-package is an integrator for ordinary differential equations.

Follow the above tutorials to learn about Python Scipy according to categories from basic to advance levels. After covering all the tutorials, you will be able to solve scientific, engineering, and other problems in an efficient way.